Puhtimäki started his career in 2005 with Koskenkorva, but his career really gained momentum in 2014 with a move to Tahko. In 2014 Puhtimäki was ranked 3rd in the league in terms of successful hits (moving the point runner), with 186 over the season, including 100 successful hits moving the runner from 1st to 2nd base. In addition to this he reached home as a runner 50 times in the regular season, the 5th highest in the league.

From 2014 to 2017 Puhtimäki continued to gain attention as a top player and saw him move to Joensuu. In 2018 and 2019 Puhtimäki guided Joensuu to their first and second Superpesis championships and became a significant figure for the sport.

The Union of Sports Journalists has been awarding the best athletes by sport since 1946. The range of sports has grown year by year and this year the best athlete has been named in 76 different sports. Juha Puhtimäki was ranked the best in baseball for the second year in a row. Athlete of the year was awarded to Teemu Pukki (Football), who has put Finnish football on the world stage ahead of the Euro 2020 tournament.

Here at Superpesis Roundup we want to congratulate Juha Puhtimäki for this award and his phenomenal achievements to date.

The open letter can be found here
http://www.pattijoenurheilijat.fi/yleinen/raahen-urheiluseurat-huolissaan-liikuntapaikkojen-mahdollisista-kayttomaksuista/

Later in the week Raahe added that after the local environmental board meeting, savings appear to effect only physical activity and hopefully not the broader sporting community.

We here at Superpesis Roundup hope that the future of funding in sporting activities will continue to be available in the region and continue to enrich the lives of everyone in the region and beyond. Sports and recreation are fundamental to the health and wellbeing of people in society and investment in this area is essential to maintain any positive impact this brings.

Koskenkorvan Urheilijat sign a farm deal with Ylistaron Kilpa-Veljet (Suomensarja team)
With the start to the 2020 Superpesis season rapidly approaching, Koskenkorva has signed a farm deal with immediate effect with Ylistaro. Ylistaro are in the Suomensarja (which is the 3rd tier of national league system) and boast a stock of young up and coming players. Having survived a difficult 2019, Koskenkorva will look to rebuild and put themselves in the mix for the playoffs at the end of the season.

“With the Farm Contract, we are sure to provide our junior players with high-quality men's matches on the Ylistaro team from the Finnish Series, in addition to junior-level matches. Ylistaro is a great jumping-off point for the upper stages and we see the cooperation as a great development for our operations” says Juha-Pekka Karvonen, President of Koskenkorvan Urheilijat

“We are very excited about this agreement with Kossu. With a farm contract we are able to give Ylistaro team players a great access to Finland's toughest baseball lineup. Our Finnish league team will also receive significant reinforcements for next season when the player traffic between the Koskenkorva team is seamless”
Jukka Polvi-Koski, Chariman of Ylistaro Kilpa-Veljet

Practice games are underway as the start of the Halli-SM sees to Joensuu put on a dominant performance against Siilinjärvi
With Joensuu opening this year’s Halli-SM tournament with an emphatic win over Siilinjärvi, the rest of the Superpesis teams are now engaged in training and practice games. Our review of the Joensuu v Siilinjärvi game can be found here:
https://superpesisroundup.blogspot.com/2020/01/halli-sm-review-joma-v-siipe-120120.html

Tampere PP, Manse v Kankaanpään Maila - 0-2 (3-4, 2-3)
On Saturday 18th January Kankaanpää got a glimpse of the newly promoted Tampere side in a 0-2 win. Tampere were edged out in both jakso by a single run. Although the game was won, the sides participated in a kotiutuskilpailu which Tampere won 2-0.

Haminan Palloilijat v Hyvinkään Tahko
Also on Saturday Tahko took on Ykköspesis side Hamina in a practice game. Tahko dominated throughout and won 0-2 (1-7, 0-5).


On Sunday 18th January Vimpeli played their second practice game of the weekend against Koskenkorva; however, despite winning the first jakso 3-2, Koskenkorva scored big to tie the game by winning the second jakso 1-6. In the kotiutuskilpailu Koskenkorva continued to score whereas Vimpeli appeared to have run out of steam. Koskenkorva won the contest 0-3 to win the game 1-2k.
Joensuu Koskenkorva News Pesäpallo Raahe Roundup 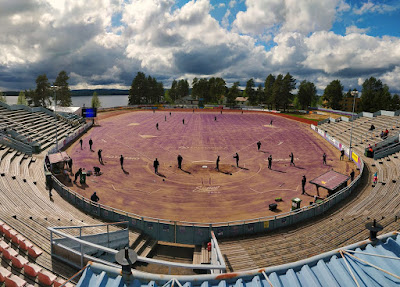 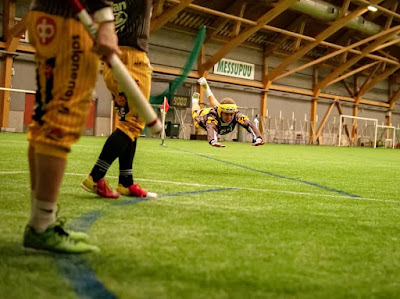